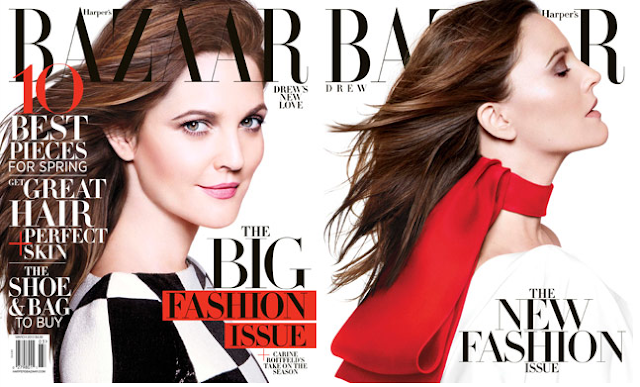 Drew Barrymore looks elegant and sophisticated on the March 2013 cover of Harper’s Bazaar which hits newsstands February 12th 2013. The starlet rocks a classic makeup look consisting of pink lips, soft nude eye makeup and iridescent skin. It’s not surprising to see Barrymore flaunting a refreshing face of light makeup after the new mother launched her very own affordable makeup line, Flower, earlier this year. Inside the magazine Drew discusses everything from her baby daughter Olive to life as a celebrity and the hardships of balancing the public sphere of her life as well as the personal sphere of her life.
One element of the cover that especially stands out? Barrymore’s mod black and white top. Black and white is hot for Spring 2013 and on the cover Drew definitely shows the elegant and chic side of black and white checks. It’s easy to be intimidated by the bold and clear cutting contrast between black and white, but don’t be…it’s a great way to make a style statement! Looking for some inspiration on how to rock black and white like Drew Barrymore on her Harper’s Bazaar March 2013 cover? Check out a roundup of hot black and white pieces to love…

These four edgy and chic pieces use the black and white trend in a sophisticated and stylish way. The great thing about black and white is it is attention grabbing and fierce while still maintaing a very elegant and classic vibe. It takes courage to wear something that will get you noticed (after all bold fabrics take guts to wear!) but if worn correctly you’ll be a serious trend setter among your friends!
Did you love seeing Drew Barrymore on the March 201 issue of Harper’s Bazaar? Would you rock a black and white outfit like Drew does on the cover? Leave a comment bellow!
— Annie Robinson