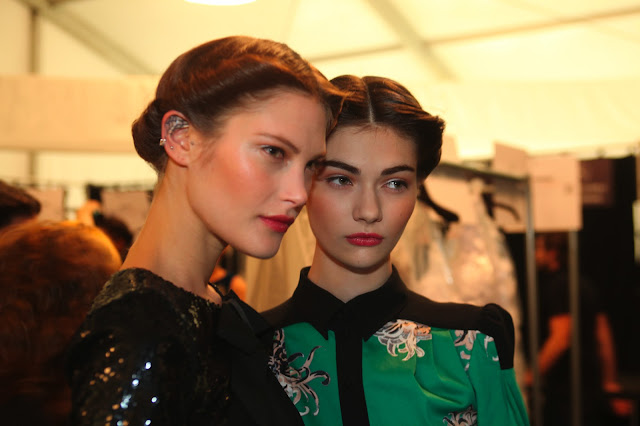 Carolina Herrera’s Fall/Winter 2013 collection debuted at New York Fashion Week and made a big splash for its great clothing and amazing hairstyles! The Fall/Winter 2013 collection was inspired by music and featured garments in rich jewel tones including ruby, sapphire and emerald. All of the models in the show wore their hair slicked back and parted in the center. The sleek hairstyles for the show were created by Orlando Pita of Orlo Salon for Moroccanoil and definitely coordinated with the wonderful clothing in the collection. The hairstyle can be best described as elegant rolls pinned close to the head for a sophisticated and modern finished product. Want to learn how to do this hairstyle yourself? 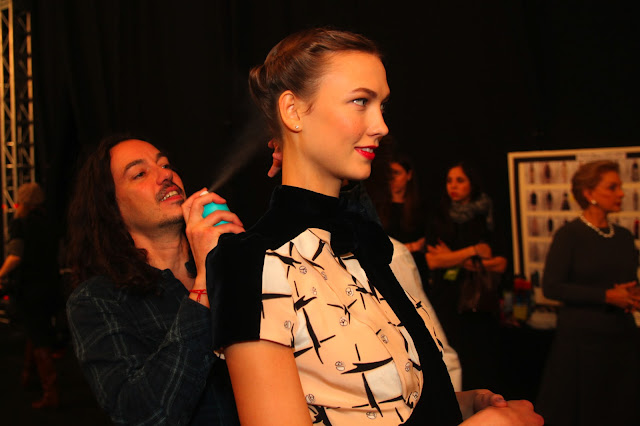 Create The Hairstyle From The Carolina Herrera Show With Tips From Orlando Pita:

“I started by spraying new Moroccanoil Heat Styling Protection (available March/April 2013) the hair to prepare for blow-drying and for a soft, natural-looking hold. For models with fine hair, I also worked in Moroccanoil Volumizing Mousse, and then blow-dried hair straight.” 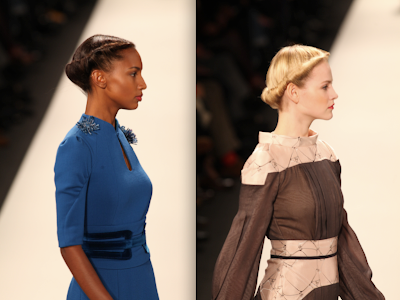 “Next, I applied Moroccanoil Hydrating Styling Cream to create a beautiful modern sheen, for styling control, and to help make the look sleek and perfect. I applied a bit more at the roots and top of hair since we were creating the style so close to the head.”
“I started by parting the hair down the middle to create two sections, and a third, which started behind the ear, up to the crown, and down to behind the ear on the other side.”
After lightly backcombing (about 2 inches from the root) for models with fine hair, I took each front part, rolled it very tightly, and pinned the roll at its seam as well as behind the ear.”
“I then took strands remaining at the end of the rolls, twisted and crisscrossed them at ear level and pinned to serve as a focal point to secure hair that would be rolled up from the remaining back section. Finally, I raised the back sections slightly above the nape, rolled them tight but a bit wider than in the front, then tucked them in and pinned.”
“I used a bit more Moroccanoil Hydrating Styling Cream on my fingers and applied it to any flyways or loose strands, so that the hair stayed sleek and perfect.”
“To finish I gave the hair a very light misting of Moroccanoil Glimmer Shine Spray for extra luminosity and shine.” 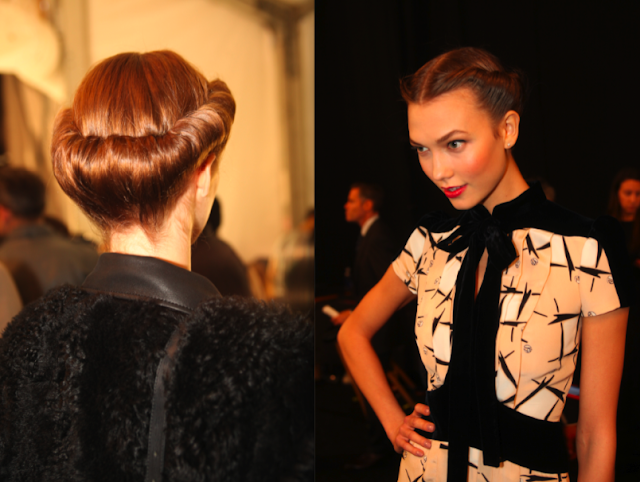 Did you love the hair at the Carolina Herrera Fall/Winter 2013 RTW runway show in New York City? Leave a comment bellow to let F&B Inc know!